the toothbrushes, along with plastic water bottles are the most ubiquitous plastic items contributing to the floating  “Great Pacific Garbage Patch”
do not despair! we can stop using toothbrushes! and i think most of us no longer buy bottled water.

after 40 years of recycling, we know don’t we that it is better not to manufacturer the things in the first place?! 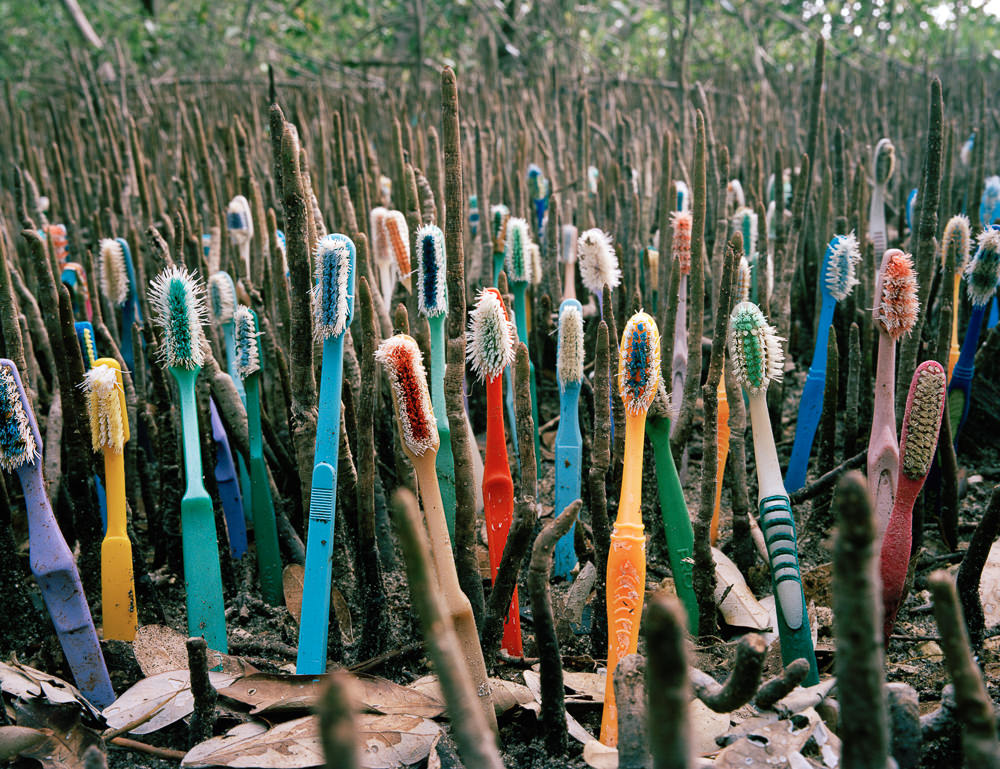 Working along a single stretch of coastline in Sian Ka’an, Mexico’s largest federally-protected reserve, artist Alejandro Duran collects countless bits of trash that washes up from locations around the world. So far he’s discovered plastic debris from dozens of countries on this shore of the Caribbean coast which he utilizes for site site-specific installations for an ongoing project titled Washed Up. By creating aesthetically pleasing landscapes from a disheartening medium, it’s Duran’s hope to create a harsh juxtaposition that draws attention to the global catastrophe of ocean pollution. #washedupseries 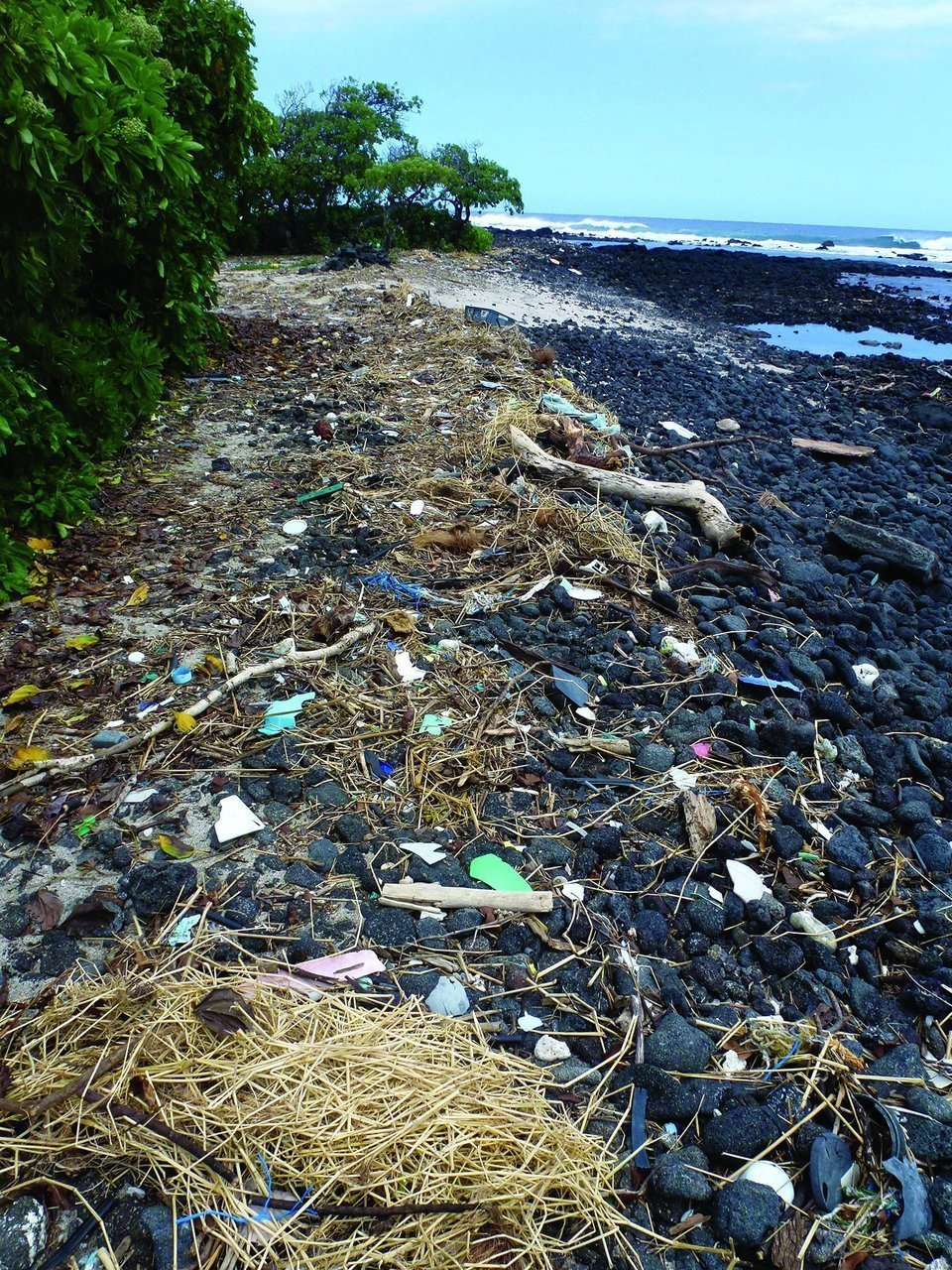 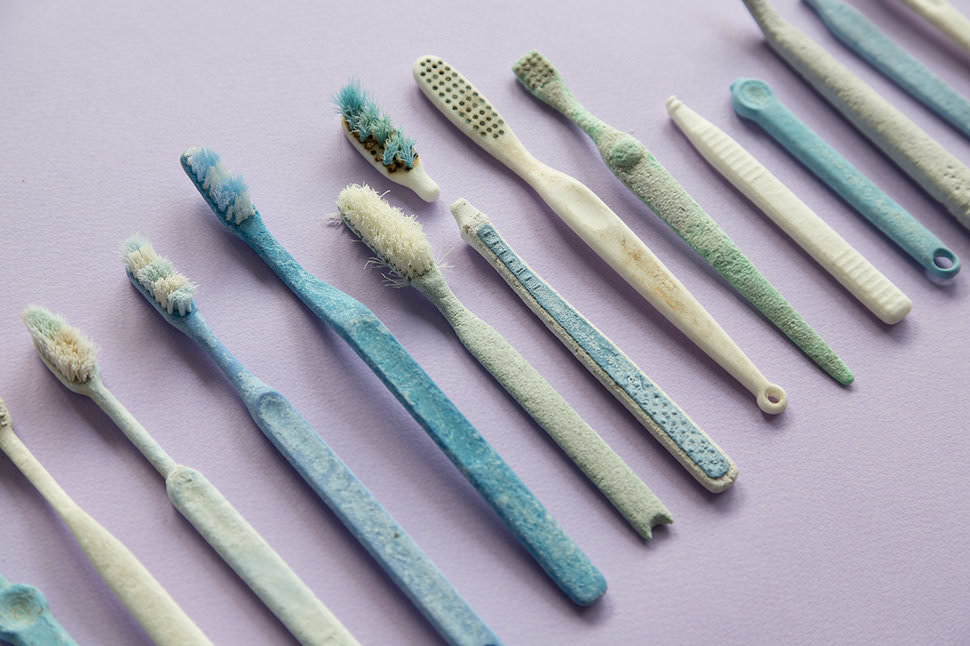 After collecting whatever trash she could carry with her, Thomas turned the debris into various designs that she hoped would challenge designers to rethink the way they view and use plastics.

Thomas sorted pieces of trash into simple yet striking color schemes to show the potential for beauty. For example, deteriorated toothbrushes, bristles in tact, are lined against a faded pastel purple.

It’s a sunny afternoon and a crew of kids is building an epic sand castle on Willows Beach in Victoria, British Columbia. Using a fleet of toy trucks, they haul in moist sand from the shoreline to construct their masterpiece. One child pulls a toothbrush from the tipper and triumphantly sticks it in the sand castle like a flag on a turret. It’s hard to image what country the flag would represent; the ocean is full of toothbrushes and other plastic waste that know no borders.

Every minute, the equivalent of one real-life garbage truck full of plastic is dumped into the ocean. 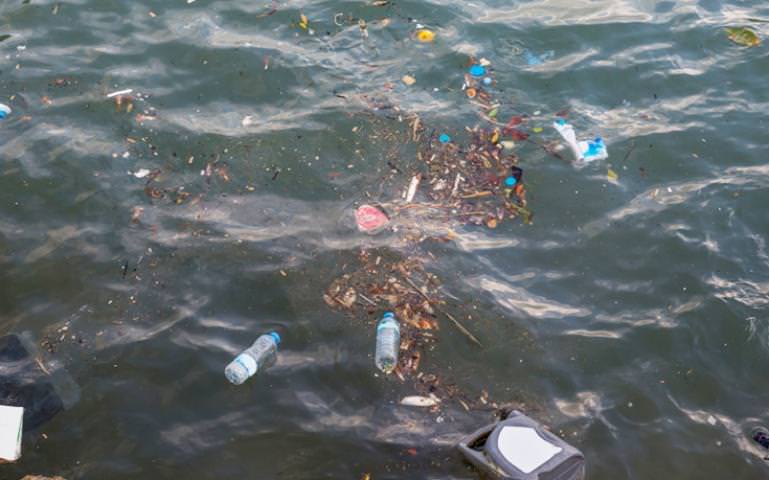 The world’s oceans have gyres, where much of our trash ends up. Is most of this debris plastic? What’s the estimated tonnage in these trash patches (some of which are said to be larger than the entire U.S.), and how densely are they packed?

There’s a popular image of the oceans’ garbage patches as huge, solid islands of disgusting trash, but only somebody who thinks he’s Jesus would be crazy enough to try to walk on one. In fact, clots of closely packed debris are rare in the vast oceans, except in occasional eddies where fishnets, bottles, balls, and toothbrushes — and much more — agglomerate.

Between 60 to 95% of marine litter is plastic, and about 270 species are harmed or killed by becoming entangled in it or ingesting large pieces. Nobody knows the total tonnage, but some estimates say that 7 million tons of plastic end up in the oceans every year. (One whale washed up on the coast of France with a whole ton of plastic, including supermarket bags, in its belly.) 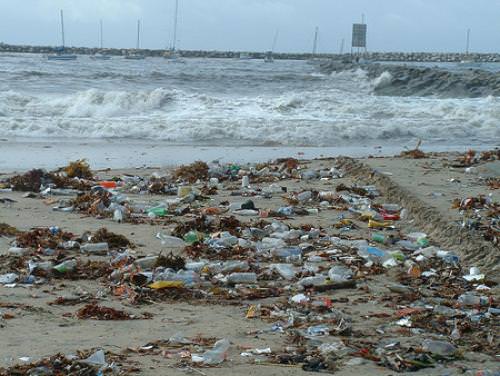 According to NOAA and others, plastic debris in the oceans comes from many sources, including fishing lines, PET bottles, polyester clothing, detergent bottles, plumbing pipes, drinking straws and toothbrushes. The photo below comes from the website of a group called Heal the Bay 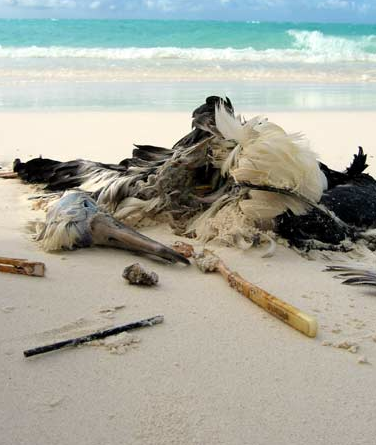 “The Great Pacific Garbage Patch” is a commonly used term for what should be more accurately described as “The Eastern Pacific Trash Vortex.” 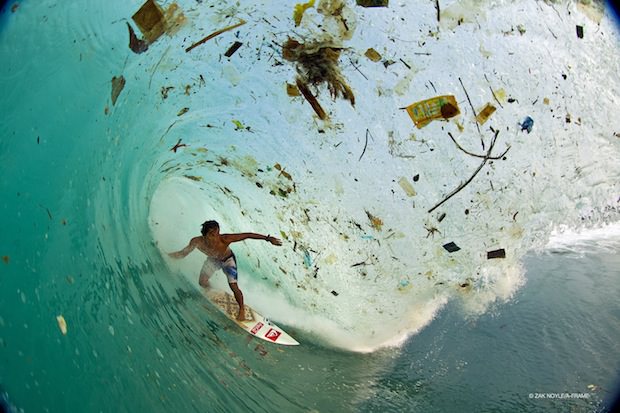 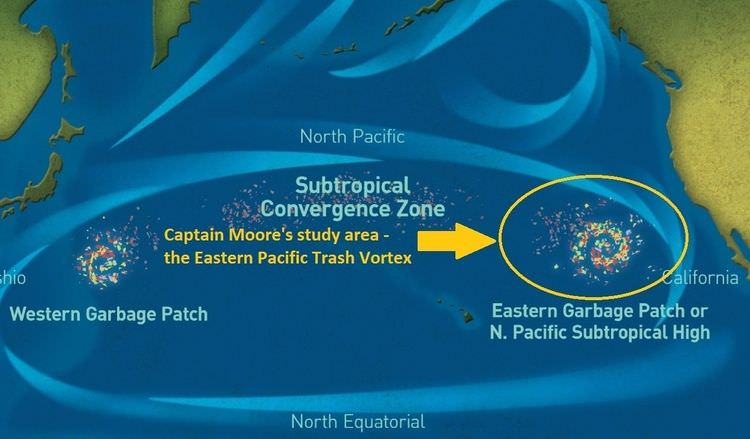 The Mouth-Body Doctor on You Tube

Searching for ECO TEETH products which do not harm mother earth, us or animals